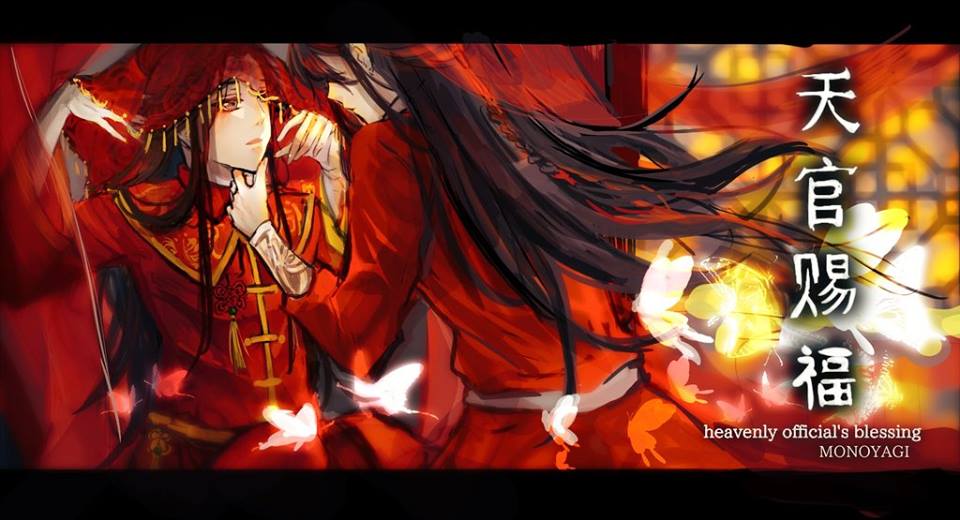 For those who are already fans, let's go ahead talking about it/posting fanarts/share opinions and theories. For those who haven't read it yet, I'll post a short introduction of it.

Genres: action, comedy, shounen ai (nothing explicit, they kiss at most), chinese fantasy, some drama parts.

﻿Eight hundred years ago, Xie Lian was the Crown Prince of the Xian Le kingdom. He was beloved by his citizens and was considered the darling of the world. He ascended to the Heavens at a young age; however, due to unfortunate circumstances, was quickly banished back to the mortal realm. Years later, he ascends again–only to be banished again a few minutes after his ascension.
Now, eight hundred years later, Xie Lian ascends to the Heavens for the third time as the laughing stock among all three realms. On his first task as a god thrice ascended, he meets a mysterious demon who rules the ghosts and terrifies the Heavens, yet, unbeknownst to Xie Lian, this demon king has been paying attention to him for a very, very long time.

This is a novel by MXTX (same author as Mo Dao Zu Shi and Scum villain's self-saving system if anyone is familiar with them).
There are currently two people translating this novel. One is Sakhyulations, which is more polished, and another that's faster but not so polished. I have the link for the faster one if anyone needs it.
New Posts Messages have been posted since you last loaded this page. View them?
Follow